Australian Bureau of Statistics (ABS) has released new statistics that show an increase in full-time renewable energy sector jobs of approximately 33 percent in 2016-17 from the previous year.

At almost 15,000 jobs, large-scale solar energy installations, rooftop solar and wind farms were the biggest contributors to this jump in employment numbers.

The ABS data covers estimates of full-time equivalent (FTE) employment in the renewable energy sector from 2009-10 to 2016-17. 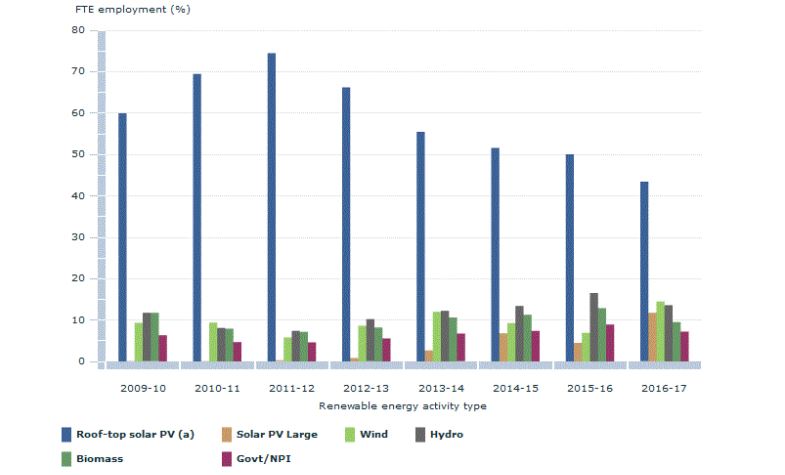 As well as actual installations, the statistics include other related jobs. For example, in rooftop solar panel installations, it includes site and electrical preparations, roof modifications, testing and certification and project management.

According to the data, almost three-quarters of the increase in FTE was due to large-scale solar and wind projects. Increases in rooftop solar installations led to 860 additional jobs during the period.

Influencing factors include government policies such as subsidies, renewable energy targets and pricing policies. The biggest factor of the solar uptake is the promise of lower electricity bills.

Rooftop solar penetration in the state of Queensland sits at 32 percent. South Australia follows at 31 percent, then Western Australia at around 26 percent. The rest of the states and territories are below 20 percent, with the Northern Territory in the lowest on 13 percent.

Queensland provides a clear example of how state government support for renewables influences uptake of solar. State policy includes no-interest loans for solar and energy storage batteries for households and small businesses and rebates on solar batteries. The statistics indicate this approach can lead to lower costs for consumers and an increase in employment in the sector.